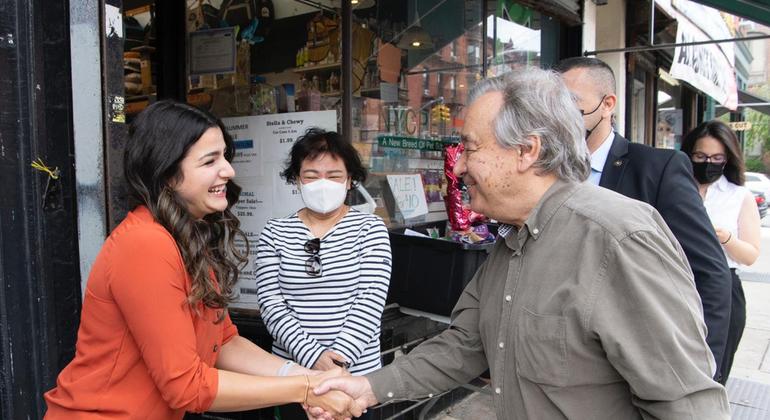 “Like millions of refugees around the world, they are helping to bring new life, prosperity and rich diversity to their host communities. We must continue to support them,” the UN chief said on Twitter after the visit.

Before #WorldRefugeeDayI visited refugees from Iraq and Afghanistan currently living in New York.

Like millions of refugees around the world, they are helping to bring new life, prosperity and rich diversity to their host communities. We must continue to support them. pic.twitter.com/Zew5oV8RP6

Mr. Guterres, who served as the United Nations High Commissioner for Refugees from 2005 to 2015, underscored the vital role of developed countries in hosting refugees and providing them with opportunities, whoever they are and from where. let them come.

Mr. Guterres’ first stop was in Brooklyn, where he visited Suzan Al Shammari, an Iraqi refugee who fled in 2010 with her family from Baghdad to Cairo, Egypt.

Registered with the United Nations Refugee Agency, UNHCRthey were then able to resettle in California and from there, with further assistance, traveled to New York.

Ms. Al Shammari told the Secretary-General that having grown up in the war, she wanted to be able to help other refugees. With this in mind, she is currently a social worker with a non-governmental organization (NGO) – having recently obtained a master’s degree.

“Every day you think will be the last. And it’s not just one of those things…it could literally be the last. When I went to Egypt with my family, it was also difficult to be there as a refugee in limbo. So moving to the United States, big as it is, took me a few years to adjust to the fact that ‘I’m not going to die tomorrow,’” Ms Al Shammari said.

Resettlement provides a “second chance” for those forced to flee, said Al Shammari.

“Bringing in refugees is a life-saving measure and it is something that every leader, every country, should contribute to and be responsible for,” she said.

Having had the opportunity of a good education, a safe new home and fluency in the language of her host country, the Iraqi refugee recognized that she was “one of the lucky ones”.

“I can say from my personal experience… it’s not easy to come to a country you don’t know, in a language you don’t speak. Both my parents were engineers in Iraq and [now] they cannot work with their diplomas,” Ms. Al Shammari explained.

She thought it would help “if companies took more initiative, hired refugees and created more opportunities for immigrants.”

Every day you think will be the last – resettled Iraqi refugee

“You see, some will hear their accent, hear that they don’t speak English well, and say, ‘I don’t think that’s going to work'”.

According to the latest UN data, there are currently some 1.2 million internally displaced persons (IDPs) in Iraq among more than six million originally displaced by violence involving the Iraq terror network. ISIL from 2014 to 2017.

Meanwhile, Iraq has hosted more than 290,000 refugees from Syria and other countries – mostly in the Kurdistan region, which at the start of 2020 hosted 25 of the country’s 26 camps.

Installed in the United States

Mr. Guterres then traveled to Queens to visit an Afghan refugee couple, Shafi Alif and Rohina Sofizada, who greeted him with spiced green tea and traditional Afghan treats.

Chatting over their cups, Mr Alif revealed that in 1992, when he was five months old, his family marched for 40 days seeking asylum in Pakistan – where they remained for more than 10 years.

They registered with UNHCR, which then helped them return voluntarily to Afghanistan in 2002. The UN agency provided financial support for their return to Kabul, including transportation and a cash allowance.

The couple agreed they had “peaceful years” in the country until 2018.

Working with the US Embassy in Kabul, Ms. Sofizada received a special visa to resettle in the US and Mr. Alif, who worked with the Polish military in the Afghan capital, later joined her, with a special immigrant visa.

Although they are happy to have been able to travel to the United States, they are worried about their family in Pakistan, who left Kabul again after the Taliban seized power last August.

“My family was rejected at the border twice, even having all [the necessary] visas and paperssaid Ms. Sofizada. “We are relieved to be here, but we are still worried about our loved ones.”

Mr. Shafi also works to help new arrivals as a social worker with an NGO, where he supports arriving Afghan evacuees and parolees.

He argued that no refugee is “happy to leave their country”, but does so under threat of violence or persecution.

He pleaded for “more resettlement places” and help with basic needs – like housing – to better contribute to their new communities.

We always worry about our loved ones – resettled afghan refugee

According to the UNHCR, Afghans constitute one of the largest refugee populations in the world.

There are 2.6 million registered Afghan refugees worldwide, including 2.2 million in Iran and Pakistan alone. And another 3.5 million people are internally displaced.

More than half of the Afghan population, or 24 million people, face acute food insecurity and an estimated 97% live well below the poverty line.

After hearing these fascinating stories, Mr. Guterres called on developed countries to do more.

He reminded them of their role in welcoming and the possibility for refugees to start afresh in complete safety, far from degrading camps or poor housing conditions.

The Secretary-General recalled that when he led UNHCR, there were twice as many resettlement opportunities for refugees and urged more States to open their borders to asylum seekers.

In 2021, 86% of all resettlement cases submitted by UNHCR involved survivors of torture or violence and people in need of legal and physical protection.

Most were vulnerable women and girls and just over half involved children.

According to the UN, the world passed a major milestone in May, 10 weeks after Russia invaded Ukraine.

“With the women, children and men fleeing conflict elsewhere in the world, the total number of forcibly displaced has reached 100 million – a grim indictment of our timessaid the UN chief in his message commemorating World Refugee Day.

“The global refugee population is at an all-time high,” he continued, noting that the war in Ukraine has triggered “the largest and fastest displacement in Europe since World War II.”

A Ukrainian woman who was forced to flee overnight is looking for a job online.

The senior UN official urged everyone to reflect on “the courage and resilience of those fleeing war, violence and persecution” while acknowledging “the compassion of those who welcome them”.

He said the day affirms a fundamental tenet of our common humanity: “Everyone has the right to seek safety – whoever they are, wherever they come from and whenever they are forced to flee.”

According to international law, the right to seek asylum is a fundamental human right.

“People fleeing violence or persecution must be able to cross borders safely…not be discriminated against…unfairly denied refugee status or asylum because of their race, religion, gender or their country of origin…[or] be forced to return if their life or freedom were in danger,” the UN chief said.

“And like any human being, they should be treated with respect.”

But security is only the first step. Once resettled, refugees must have the opportunity to heal, to learn, to work, to thrive, to return home if they wish or to rebuild their lives elsewhere, in safety and dignity, said Mr Guterres.

“All over the world, refugees have brought new life, prosperity and rich cultural diversity to their host communities” and their protection is “a responsibility we all share”.

He encouraged everyone to commit to doing more for refugees and the countries hosting them.

“Let us stand together… defend the integrity of the international protection regime… and never lose sight of our common humanityconcluded the Secretary-General.

New support for victims of the exploitation of departmental lines

2022 Marqeta State of Credit Report: Cost of living concerns weigh heavily on US…