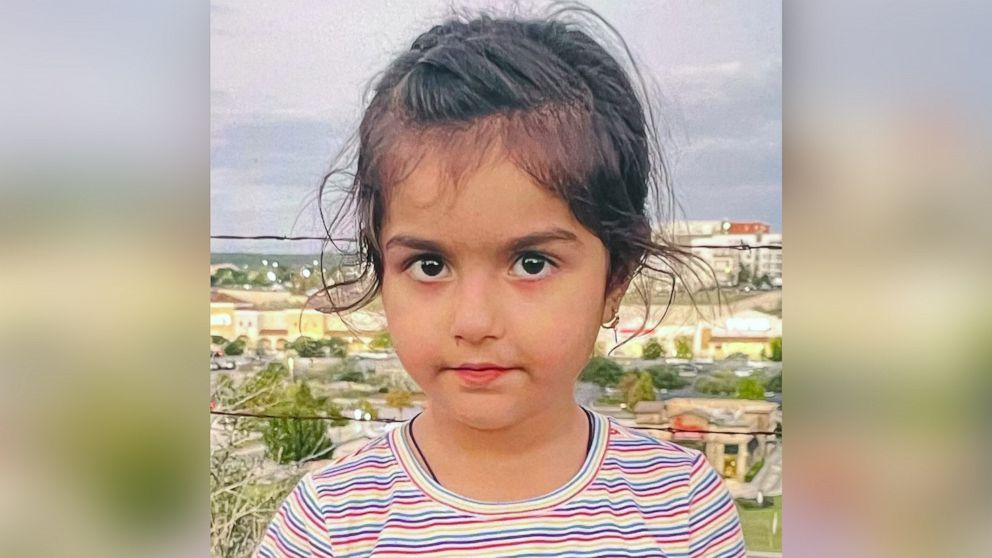 The investigation led the FBI’s Underwater Search and Evidence Response team to an area that had yet to be searched, according to San Antonio Police Chief William McManus.

“We don’t want to leave anything to chance,” McManus told reporters during a press briefing Tuesday night at the scene of the search. â€œAnything we get that has any potential, we follow through. And that’s what we’re doing here today.â€

The neighborhood is located near the family’s apartment complex, according to ABC San Antonio affiliate KSAT.

The chief said he could not provide any further information on what drove detectives to the area, but noted that the search will continue until nightfall on Tuesday and resume on Wednesday.

“I wish there was more edifying information that I could give you to at least give some hope, but unfortunately I don’t have any of that information,” he said.

Lina Sardar Khil was last seen on December 20 between 4 p.m. and 5 p.m. in a park on the 9400 block of Fredericksburg Road in San Antonio, police said. The park is located near the family home in the Villa Del Cabo apartment complex.

Lina has brown eyes and brown hair and was last seen wearing a black jacket, red dress, and black shoes. Police have issued several Amber alerts and said she may be in “serious danger”.

Lina’s family is part of the Afghan refugee community in San Antonio and speaks Pashto. Police have issued alerts in multiple languages â€‹â€‹to the community, urging anyone with information to come forward.

“Our missing persons unit is working around the clock to receive leads and advice on Little Lina’s case,” a SAPD spokesperson told ABC News. “We will continue to follow every lead, no matter how small, until Lina is located.”

The FBI has said it accepts any advice, video footage or information about Lina’s whereabouts.

Agent Justin Garris of the local FBI office in Justin San Antonio told reporters on December 28 that the investigation into Lina’s disappearance was “aggressive,” adding that the FBI had used its rapid deployment team for kidnappings. ‘children, its behavioral analysis unit, its intelligence teams and forensic examiners. .

Authorities are asking anyone with information about the case to call the SAPD Missing Persons Unit at 210-207-7660.

The community mobilizes behind the family

As the search continues, the community rallies around the family by joining the search teams and raising funds to help find the child.

Eagles Flight Advocacy & Outreach, a San Antonio nonprofit, joined the research this weekend with around 150 people from the Afghan community.

“We cannot stand still. We have to do something,” Pamela Allen, CEO of Eagles Flight Advocacy and Outreach, told ABC News.

Allen said the group had been in contact with police and were actively searching for surrounding areas which are points of interest in the case.

“Yesterday about 150 Afghan men and children came to pick up this baby,” Allen said, adding that seeing the community come together was “the most incredible thing.”

The San Antonio Islamic Center is also supporting the family by offering a $ 100,000 reward to anyone who can help the police find Lina.

The San Antonio Crime Stoppers have offered an additional $ 50,000 for information leading to the arrest or charge of a suspect accused of being involved in the disappearance.

Lina’s family moved to the United States in 2019, her father, Riaz Sardar Khil, told KENS5 through a translator.

Khil said that at first they thought their daughter might be with another Afghan family in the community, but now they think she may have been abducted.

“In all of our lives, we have not been as saddened as we were yesterday and today,” he said.

Culturingua, a San Antonio nonprofit that assisted in Lina’s search, is a leader in the Afghan Refugee Response Collaboration, a city-wide effort to support the large influx Afghan refugees in San Antonio.

â€œRefugee resettlement agencies are under tremendous pressure as this large influx of Afghans arrives in the community,â€ Mavrakis said, adding that the coalition seeks to support the integration of Afghan families into the community through services that go “beyond the reach and capabilities of social workers.”

Nader Mehdawi, COO of Culturingua, told ABC News that one of the “biggest challenges” families like Lina face is the language barrier.

“Many of the Afghan refugees who come here only speak Pashto or Dari,” he said, adding that this is one of the reasons why many refugees “are struggling to find work”.

Mavrakis, who visited the family on Friday with other staff, said Culturingua is one of the organizations that has offered translation assistance to the family as they communicate with police and navigate through the legal system.