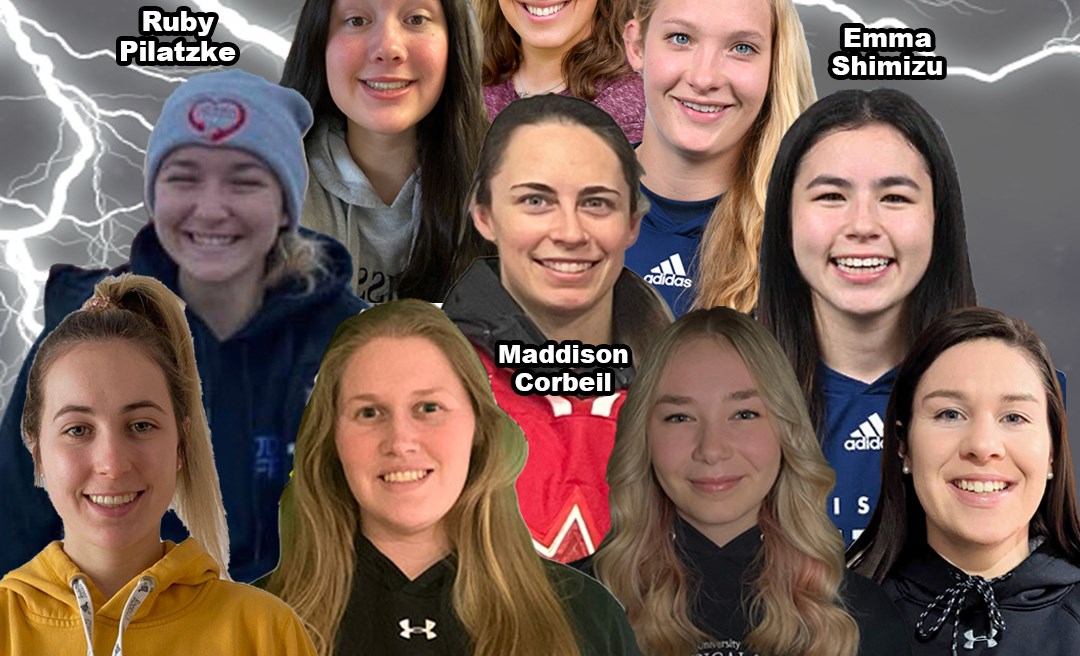 Take the example of a player like rising Team Canada star Sarah Fillier, who began to believe she could be an Olympian because she saw women’s hockey on TV during the Olympics. This is the type of reality that we want our athletes to believe in as well.

The Ice Boltz organization points out that often, by the age of 14, girls drop out of the sport at more than twice the rate of boys and not having fun is the main factor. Hockey Canada has found a direct link between the hockey experiences created by women in coaching and leadership roles and the retention of girls in hockey.

This season, the North Bay & District Women’s Hockey Association has many female role models for its young athletes to look up to as well.

These members of our association grew up playing hockey at different levels, in different cities, and even different provinces, and they wanted to pursue their hockey careers behind the bench. As an association, we have many team staff who are female non-parent volunteers who are all passionate about growing the game of hockey. These people believe they can show young female athletes that their hockey career doesn’t have to end when they stop playing and that they can aspire to achieve big goals, like playing for Team Ontario, a university team. or collegiate or Team Canada one day. If they can see it, they can be.

Kiara Jefferies, is Jefferies U11 Head Coach, U7 Fundamentals Assistant Coach and Director of Marketing and Communications for Ice Boltz.

Kiara is from Georgetown, Ontario and grew up playing hockey in North Halton. Since moving to North Bay in 2017, she has been an avid member of our association in our U7 program, our U9 program and more recently our U11 program. Kiara got involved in the association to give back to a sport she grew up playing and coaching at home. Kiara’s goals as leader of the NBDGHA are to help grow the game of hockey and show young women that they belong in the sport in all roles (players, coaches, trainers, etc.) and that their Hockey career doesn’t have to end when they decide to quit playing. Kiara is currently studying at Nipissing University Teachers College.

Nicole Campbell is the Jefferies U11 assistant coach. Nicole wanted to take on a coaching role because she had the chance to have great experiences with many of her hockey coaches. Nicole wanted to pass on what her coaches taught her and hopefully help the next generation of girls love the game as much as she does!

Nicole is a first year student at Nipissing University. She played for the North Halton Twisters growing up but eventually moved to Brampton in her older years. One thing she wants to remind everyone who plays is to take a step back and never be too hard on yourself, the most important part of hockey will always be to have fun no matter the level at which you are playing.

Natasha Resrup is the Jefferies U11 goalie coach. Natasha got involved because hockey has always been a safe space for her. This inspired Natasha to want to provide the same experience for current and future players. His goal is to help them grow and develop their skills on and off the ice. Natasha would like to tell a current Ice Bolt that even when you stop playing, your hockey career doesn’t have to end. Natasha is currently studying Physical Education and Health at Nipissing University

Emma Shimizu is an assistant U11A coach. Emma started coaching after quitting playing to teach young people that they can do whatever they want. As someone who loves the game, Emma wanted to be able to foster that same love for athletes within our association.

“Don’t let anyone tell you that you can’t make it in the sports world,” Emma said.

Ruby Pilatzke is that U11 A trainer. Ruby knows how much female role models impacted her when she was younger, so there’s nothing better than combining that with her love for hockey. Ruby would tell current Ice Boltz to “100% do it!” and get involved in coaching! Ruby is currently studying at Nipissing University to become a teacher.

Madi Solie is the U9 Courville assistant coach. Madi has had an incredible hockey career traveling all over Canada and the United States and just wanted to be able to share her passion, experience and knowledge of the game to inspire the younger generation of girls to set hockey goals and achieve them. to chase. North Bay has been Madi’s home for five years and these young girls show up to Nipissing women’s hockey games at Memorial Gardens and cheer on their team for inspiration and to be able to work 1:1 on these girls and then they see their coach play is a truly humbling feeling and experience. Women’s hockey in general must continue to grow and Madi believes she has the power to help with that, by mentoring young players, who hopefully will one day have more opportunities to play professionally as a career. .

Maddison Corbeil is Courville’s U9 assistant coach. Maddison got involved in coaching to give back to the organization that helped her become the person she is today. Maddison remembers how she felt looking up to her female coaches when she was Ice Bolt, the incredible role models they were to her, and she hopes to inspire today’s Ice Boltz youth in the same way. Maddison would tell a current Ice Bolt to absolutely get involved in coaching in the future if he’s interested. It’s a great way to continue being part of the Ice Boltz family, to give back to the organization that taught you so much, and also to use your hockey skills and knowledge in a way that’s different from what you have been accustomed to. It’s fun, challenging and extremely rewarding.

Eleonore Gravel is an assistant coach and U13A trainer. Eleonore’s participation began with a 50 hour internship for the physical education program at Nipissing University. She soon realized that she wanted to continue with the team as she developed a connection with the girls. Eleonore also believes it is important for young athletes to have a female and non-parental person on the team staff. We are often able to bring a different perspective to things while also being someone the girls can look up to. Eleonore grew up playing hockey in the Ice Boltz organization. During this time, she had the good fortune to win a gold medal and a bronze medal at the provincial championships, which she will never forget. Eleonore is forever grateful for the impact some of my coaches have had on her development as an athlete and as an individual. She now believes it’s my turn to give back and influence young hockey players like my coaches influenced her.

Laura McKenzie is the U18AA Assistant Coach Growing up playing minor hockey, Laura was fortunate enough to meet many coaches who were positive and influential role models during her playing years. In Laura’s case, each of these models was a man;

Laura hopes to continue the mentorship her coaches have given her and bring them to the players as a coach.

“Coaching is a great way to continue your involvement in the sport of hockey once your playing years are over. It gives you a sense of belonging and brings back a competitive edge that sport can provide,” McKenzie said.

Laura is an alumnus of the Nipissing Lakers women’s hockey program where she served as an alternate captain and received PRIDE and USPORTS All-Canadian awards, and her team was ranked nationally.

Tarra Trudel is the U15AA assistant coach. Tarra is very interested in growing our local female hockey players both in the sport of hockey and as people. Tara says,

“Coaching is just a logical step to give back to a game that has given me so much,” said Trudel.

“Moving from playing to coaching can be a daunting step, but the rewards are worth it. It allows you to look at the game from a different perspective and gives you the opportunity to share your knowledge with the next generation to keep trying to grow the game.”

LIC Is A Blossoming Financial Tree: The IPO Plan Shouldn’t Shake It Too Much